Conceptual subitising seems to be a  absent from many discussions being held about NUMBER, but from observing what happens in many foundation phase classrooms it may be time to thoroughly bring related ideas to mind.

Some excerpts from an article by Dr Sue Gifford: ‘part-whole awareness, which enables children to simultaneously see the whole number and numbers which make it up. The ability to think about numbers as compositions of other numbers was described by Resnick (1983) as ‘probably the major conceptual achievement of the early school years’.

Recognising how many there are by combining numbers of smaller subgroups is called conceptual subitising: this is more advanced than perceptual subitising, which involves instant recognition (Clements, 1999). Seeing numbers as combinations of other numbers helps children to develop part-whole awareness and build familiarity with number combinations. It is also much more effective than giving children number sentences to complete by counting cubes and hoping they will remember the numbers involved!

In these Covid-times, learners need to rely more on reading to access learning opportunities.

Hence, their reading skills are more important than ever before.

The diagram above may be a useful classroom activity: ask learners to describe what they see and what they learn from it. You may prompt them by asking how long the red strip is. 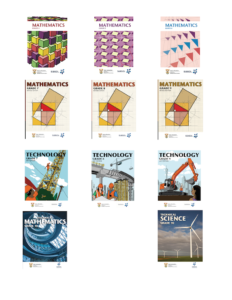 Our books are available for free download,  including English and Afrikaans learner books and teacher guides for: Grade 4 to 9 Mathematics, Grade 7 to 9 Technology, Grade 10 Tech Maths and Tech Science.